At work I live primarily in the build space, specifically MSBuild-based environments, and a common trend I’ve noticed is that many developers struggle with MSBuild. The reason for this isn’t typically because the build space is “too hard”, or at least not much harder than any other kind of programming, but instead because the MSBuild syntax is effectively its own language and debugging execution of that language is not something most developers know how to do. This article attempts to provide various techniques for debugging MSBuild execution.

First, it’s important to understand the basics of MSBuild syntax. The official MSBuild documentation is quite detailed in this regard, so for the rest of this article I’ll assume a basic understanding of MSBuild properties, items, and targets.

MSBuild unfortunately does not have a full-blown debugging experience, in terms of breakpoints and stepping through the MSBuild syntax line-by-line, but instead one has to primarily rely on logging. However, MSBuild has quite verbose logging, as anyone who has enabled diagnostic logging can attest to. Diagnostic logging has much of the required information for understanding what’s happening, but it can be near-impossible due to its incredible size and unstructured nature.

Enter the MSBuild Structured Log Viewer. Binary logging is built-into MSBuild itself, but as it’s a binary file you need a special viewer to properly consume it.

The log viewer has a few options on the start page, but the only one with major functionality implications is a recently added option to parent all targets directly under project instead of attempting (sometimes badly) to create a tree from the target graph. It now defaults to being enabled, so I also recommend this setting and will be using it throughout this article.

When a specific file is not provided, it defaults to dropping an msbuild.binlog in the current directory.

To have an example to look at, I’ll be using a trivial project structure which can be created with the following commands:

After running dotnet build App /bl and opening the resulting msbuild.binlog, you should see something like this: 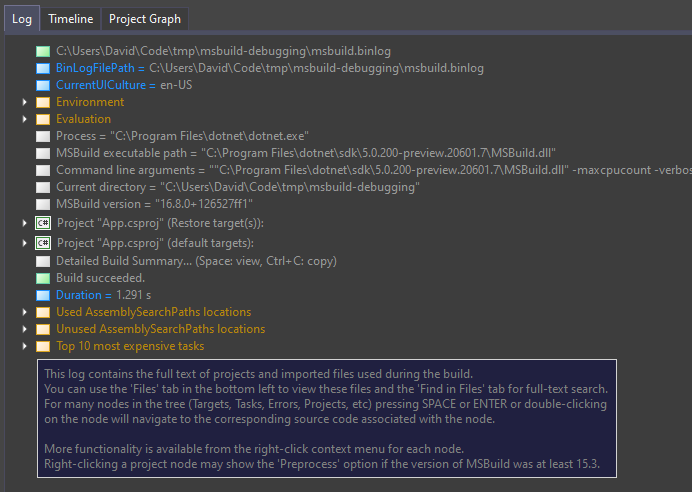 There is quite a bit of top-level information, including:

There is a search feature which can help if you know the property, item, target, or file name you’re interested in. In addition to just text searching, you can also filter by kind of thing, for example just searching properties.

For a given target, there is another target listed to the right which explains why the target executed. If you hover, you can see specifically whether it was because of BeforeTargets, AfterTargets, or DependsOnTargets. You can also tell whether the target actually executed based on its condition by whether it’s dimmed.

A non-obvious trick is that if you double-click on a project or target, it will open the file it’s contained in. This can help give you a glance into the logic of the target. You can take this a bit further and right-click on a project and select “Prepocess”, which will give you the completely flattened XML for the entire project, exactly like the -pp MSBuild switch. The preprocess can be extremely helpful in understanding the build logic.

An interesting detail about the implicit restore you can observe is that there is a global property MSBuildRestoreSessionId set. This is because during the restore, packages may not have been downloaded yet and thus any build logic which should be imported from packages may be missing. Setting a global property to an effectively random value forces the restore to be evaluated and execute in a completely separate context from the default targets. Then after restore when the default targets execute, it requires a new evaluation and imports from packages will actually be available. I’ll go into more details about how restore and how PackageReference works in a future post.

Next, configure the content to be copied to the output directories. 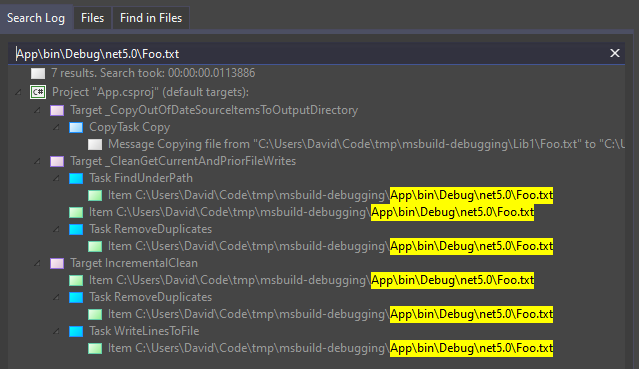 The results at the end look related to incremental clean, so the one we want to look as is under the _CopyOutOfDateSourceItemsToOutputDirectory target, especially since it says “Copying file” in the log message.

When navigating to that result, in fact all of the content the files we were interested in (and one we weren’t) are here.

Upon double-clicking the target, we see the definition for _CopyOutOfDateSourceItemsToOutputDirectory:

So the Copy task is called with @(_SourceItemsToCopyToOutputDirectory) items as the source, and copied to the $(OutDir) using their %(TargetPath) metadata.

Side note: by convention properties, items, and targets which are prefixed by an underscore should be considered “private”. MSBuild doesn’t have any true notion of scope or access modifiers, but it’s an indication of an implementation detail in the build logic and may change behavior or even be removed in the future. Because of this, if you are writing your own custom build logic, you should not depend on “private” entities and instead look for the appropriate extension points.

We can look up the value of $(OutDir) in a pretty straightforward way by looking at the properties for the project. In this example, we see OutDir = bin\Debug\net5.0\. But how did that value come about? We can look this up in the preprocess. After right-clicking the project, selecting preprocess, and doing a ctrl+f and looking for “<OutDir”, we see this block of XML:

Because $(OutDir) wasn’t specified before this, $(OutDirWasSpecified) remains unset and so effectively $(OutDir) is simply just $(OutputPath) with a possible trailing slash appended if needed.

If we then search for “<OutputPath”, we’ll find quite a few results.

$(OutputPath) is set many times, but it’s mostly just appended to in order to avoid collisions when building with various dimensions. It’s basically just bin\<platform-if-not-anycpu>\<configuration>\<target-framework>\<rid-if-set>, with various properties to control its behavior if desired.

Now we understand the $(OutDir) part of the copy destination, so next we should understand how the @(_SourceItemsToCopyToOutputDirectory) item is created. When searching we see: 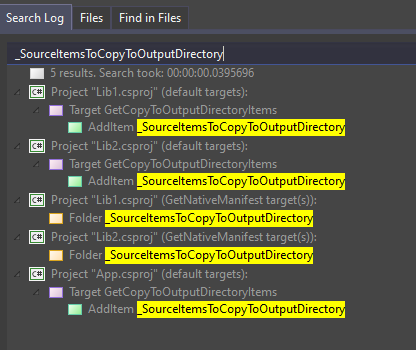 We have results from all three projects, which is expected since App depends on Lib1 and Lib2, so those other projects build first and would perform this logic themselves. How exactly App causes Lib1 and Lib2 to build first I will leave as an exercise to the reader.

To continue answering our original question, we want to look at the result for the App project, which leads us to the GetCopyToOutputDirectoryItems target, which is defined as:

And in the execution logs we see: 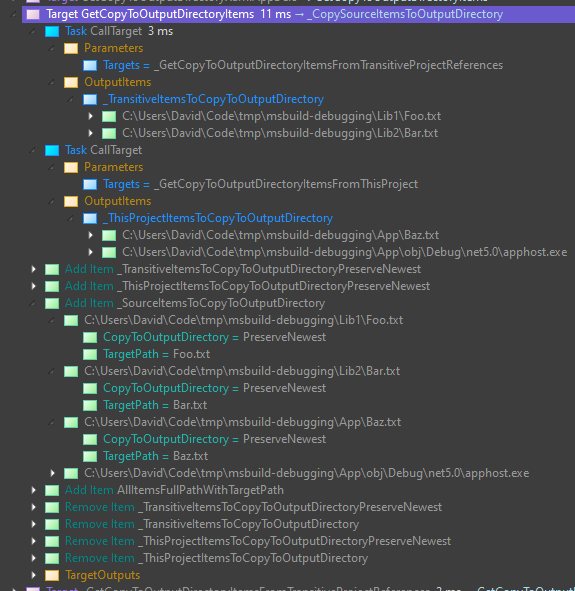 Based on the names we can guess what’s going on already. One target gathers items from project references while the other gathers items from this project. Then they’re separated into an “always” and a “preserve newest” item. We’ll focus on @(_SourceItemsToCopyToOutputDirectory) since that’s what we are tracing, but the “always” variant works very similarly except the file copies are unconditional instead of dependent on file timestamps.

Let’s look at _GetCopyToOutputDirectoryItemsFromThisProject first since it’s from this project and will likely be easier to follow. After searching abd finding the instance under the App project, we find that it’s defined as:

Then if we look up @(ContentWithTargetPath) items, we’ll find the AssignTargetPaths target:

Finally, we now see how the @(Content) item for the current project (Baz.txt in our example) gets copied to the output folder.

But we still need to understand the content from the referenced projects, Foo.txt and Bar.txt. Upon searching for _GetCopyToOutputDirectoryItemsFromTransitiveProjectReferences, finding the result in the App project, and looking at the definition, we see:

As we’ve already seen, GetCopyToOutputDirectoryItems gathers the “copy items” (@(Content), @(None), etc. with specific CopyToOutputDirectory values) from a project and its dependencies recursively, so we finally fully understand how Foo.txt and Bar.txt were copied!

Better yet, we now know how to debug MSBuild!