I’ve been dabbling with home automation for a while, and one thing that bugged me was that my home security system didn’t integrate with it at all. Doors and windows being opened seemed like something I would want to be available to me in Home Assistant, but the ADT system I had was completely closed despite being wireless. Instead of duplicating the sensors, I decided to ditch ADT and just completely do it myself. As a bonus, it’s saving me $50/month (although to be fair they offered a substantial discount to entice me to stay upon cancelling).

Admittedly, there was a bit of an up front cost in buying all the devices to replace my existing ones, especially since I decided to go with Z-Wave devices for my home, which are a little more expensive than Zigbee ones. However, this can be mitigated by prioritizing the important sensors first and adding on over time. Also, for me at least it more than made up for the cost in just a few months after cancelling my monthly bill with ADT.

My original security system was pretty basic, so I just ended up mimicking it. The devices I bought were:

Some relevant devices I already had before this project are:

Home Assistant has a built-in Manual Alarm Control Panel which allows you to display a keypad in the lovelace UI as well as use automations to arms and disarm the alarm.

The alarm configuration is a little complicated, but basically it’s just a state machine. At any given time, the alarm can be disarmed, arming, armed_home, armed_away, pending, or triggered. The difference between armed_away and armed_home is that armed_away gives you some time to leave the house and also some time to disarm when you come back. I chose to give a 2 minute delay when leaving the house and a 1 minute delay when coming home. The arming and pending states are what it’s in during these delays. disarmed and triggered should be obvious; they’re when the alarm is turned off and “the alarm is sounding”, respectively.

You can use my alarm_control_panel configuration as a starting point, which looks like this:

Now that you have the alarm configuration, you need to set up some automations to actually handle transitioning between the states. For example, if the alarm is armed and a door opens, you want to trigger the alarm. Also one the alarm triggers, you want to set off sirens, send notifications, call the police, etc.

Here are some basic automations to get you started. Note that I use a separate automations.yaml file, so your tabbing may be off and you need the automation: header if you have it directly in your configuration.yaml.

Personally, I don’t have the Z-Wave locks auto-arm/disarm the alarm, although you could do that if you wish.

Finally, just add an Alarm Panel card to your Lovelace which points to your alarm_control_panel. 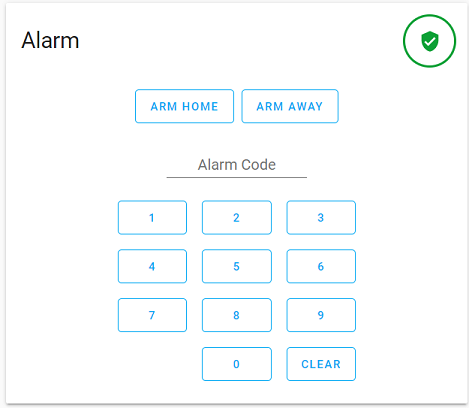 And that’s it! At least for the basics. A few more pieces were needed to fully replace my old system and pass the “wife test”.

One of the primary advantages to paying a security company is that if your alarm goes off, there’s a real human being who will notice and call you to make sure everything is OK, and call the police if it’s not.

Luckily, there’s a company out there called Noonlight which will do that for free! I’ve tested the system many times, usually accidentally, and they’re incredibly quick (sometimes TOO quick for my many false alarms…) to call to make sure everything is OK. I honestly don’t know how they make money.

To configure this, you’ll first need to add Noonlight to your IFTTT account, and enable the IFTTT integration in Home Assistant for sending events. For the latter, the configuration should look like:

Then, to set up the IFTTT applet, you’ll want to use Webhooks “Receive a web request” as the trigger, and Noonlight’s “Trigger alarm with address” as the action. Be sure to note the Webhooks event name you use. Im my case, I use “alarm_triggered”.

Now you simply need to add this IFTTT trigger action with the correct event name to your alarm trigger automation. Adding to the example used earlier, it looks like this:

My old alarm system would emit an audible tone when we came home to warn us that the alarm would be triggering within a minute or two. Originally when I replaced this with the solution described above, my wife and I would forget about it sometimes and then suddenly the siren would go off.

To help remind us, I implemented a warning system when we come home which announces through our Alexa Dot.

To get Alexa voice announcements, I use the alexa_media_player custom component.

I decided to get a little fancier with the automation and it warns multiple times during the delay period. To do this I added a timer. I also have an automation to announce when doors and windows open, so I had to add some delays in the warning so that those other automations would run first and not cause Alexa to get interrupted.

Basically when the alarm goes from armed_away to pending, I delay for 5 seconds (for the other announce automation not shown here), announce that the alarm needs to be disarmed, then start a timer. That timer is set for 10 seconds and when it triggers it repeats the warning a bit more forcefully and will continue to repeat every 10 seconds until the alarm is disarmed.

Here’s what my revised automations from above look like with these additions.

The final step in this project was to set up a wall panel so that we didn’t have to use our phones to disarm the alarm.

For this, I bought another Raspberry Pi 3 B+, as well as a touch screen Display and touch screen Case. Mounting a tablet probably would have been just as easy and cheaper if I already had an old one lying around, but I didn’t.

There are plenty of guides out there for setting up a Raspberry Pi in kiosk mode, and I honestly wouldn’t consider myself an expert in this area, but the gist is that I installed Raspbian Lite, setup ssh for easy remoting, installed chromium-browser, and added the following to ~/.config/lxsession/LXDE/autostart:

Note the url used when launching chromium. I used my external hostname so that chromium doesn’t complain about the SSL cert, but I use a Pi-hole to redirect that host to the local IP anyway so it’s not actually calling externally. There might have been an easier way to bypass the cert error and use the local IP directly, but this worked for me. Also note that the /lovelace/1 path is so that it shows my 2nd Lovelace tab, which is the one I have the alarm panel card on.

Upon first boot you’ll have to log in, so be sure to attach a keyboard and mouse before mounting. I set up a separate user in Home Assistant to log into the alarm panel so that it didn’t run as my user, an Administrator (although Home Assistant doesn’t have very granular permissions; maybe in the future). And although I haven’t set it up yet, now that Home Assistant has multiple Lovelace dashboards, I could easily add a specific dashboard for this scenario.